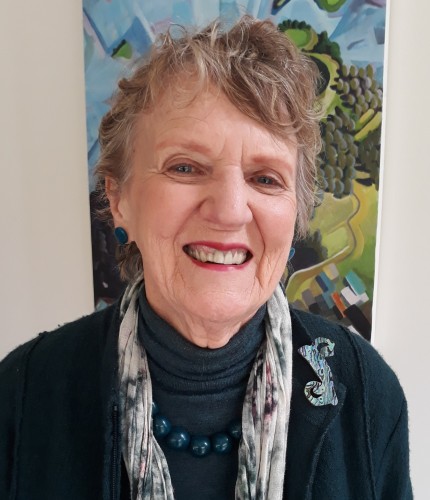 Born in Hamilton on 2 January 1937 to Lyndall and Eric Crabtree, Helen later moved with her family from Morrinsville to Mt Eden, where they settled in Pencarrow Ave.
The Epsom Normal Primary School, Auckland Normal Intermediate, then Epsom Girls’ Grammar School provided her with a sound educational base with which to attend the Auckland University College as an eighteenyear-old in 1955. Helen did start a BA but was there only a year at that point, choosing to cease her studies and become a library assistant with Auckland City Libraries. From 1970, Helen worked part-time at the Auckland Teachers’ Training College until her retirement, then went back to the university, completing her BA in 1999.
The Methodist Church was always a strong feature in Helen’s life. The well attended Mt Eden Methodist Church congregation included a strong group of young members. It was here that the friendship between Helen and Eric Laurenson evolved into a lifetime partnership. They married in 1959, taking up residence in Lynfield, where they were among the founding members of the Lynfield Community Church. Later, they moved to Epsom and joined the Pitt Street Methodist congregation in 1983. Both Helen and Eric have contributed much to the church at a local as well as a national level. On her retirement from the training college, Helen returned to university to complete her Bachelor’s degree. When a call from the Mt Eden church congregation arose for a written history to mark their centennial, she undertook to supply this need. In 1999 This Familiar Place: The Mount Eden Village Methodist Church Centenary 1890–1999 was published. Then, continuing her university studies, Helen worked to achieve first class honours for an MA in History and English for the thesis she presented on the history of Auckland’s department stores. Published in 2006 by the University Press under the title of Going Up, Going Down: The Rise and Fall of the Department Store, this was well received by the Auckland public. It was followed up by popular demand for her presentation of talks on the topic. In 2000 it was realised that Epsom was lacking in written local history in the form of published books, and had no historical society. With the keen support of friends, various historical societies were visited, the possible local interest assessed, and with her friend Valerie Sherwood, moves were made to set up an Epsom society. Helen’s energy was the vital element in the successful launching of the Epsom & Eden District Historical Society. Helen was persuaded to accept the role of the inaugural president of the nascent society, and has also served several terms in this role subsequently. The hoped-for book, The History of Epsom, was achieved in 2006, edited by society member Dr Graham Bush, and containing many articles from Helen’s pen. Returning to university, Helen worked towards her Doctorate, completing this in 2010 with the thesis Myths and the City: A Social and Cultural History of Auckland 1890-1990. Helen became the ‘go to’ person for enquiries on local history, leading historical walks, events in the Auckland Heritage festivals, and enquiries from individuals and local shops. When demand from Mt Eden readers for a ‘Mount Eden book’ became insistent, Helen valiantly agreed to edit such a book. Chapters were submitted for her exacting editing, and finally The History of Mount Eden: the district and its people was launched to a welcoming market in 2019. Helen passed away on 7 December 2021. We extend our deepest sympathy to Eric, children Sarah, Matthew and Anna, and grandchildren Hugh, Eva, Isaac, George, Tabitha, Toto, Albertine and Henry.